Families Who Work Together Grow Together

In the spring edition of Keep Connected magazine, we got to know some of the families who work together at ECH. In this issue, we’re getting to know even more of our family tree as they share how rewarding it is to work together.

BEN AND CONSTANCE LEONARD
ECH Care Coordinator Constance and her son, Ben, both work at ECH. Constance has worked at ECH for 18 years, starting at the Wellness Centre at Henley Beach when Ben was just 15 months old. Although Constance and Ben don’t often cross paths at work, they occasionally interact with the same clients. When a position came up at ECH for a Home Support Team Member, Constance encouraged Ben to apply as she noticed a real sense of inclusivity and support over her many years working with ECH. “ECH is a really positive and supportive place to work, and I wanted my son to experience that,” says Constance. 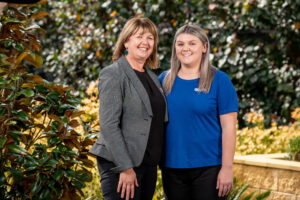 ANNA AND EMILY JONES
ECH Nursing Lead of Clinical Operations Anna and her daughter Emily, an Enrolled Nurse, both started at ECH in 2020. Anna encouraged Emily to apply for a role with ECH as she believes it is an extremely  supportive environment with plenty of learning and mentoring opportunities. “As a young person, Emily connects beautifully with older people and has genuine care and empathy for our clients,” says Anna. Anna and Emily both love that ECH is such a family orientated workplace, and their roles allow them to take shifts and care for Emily’s two young children. 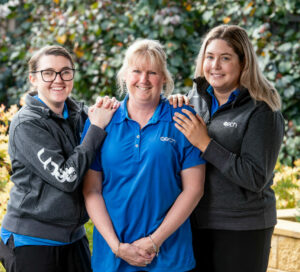 INGRID ARMANINI, VIVIENNE ARMANINI, AND ANGEL LOCK
For these three caring women, working at ECH is a real family affair. ECH Home Support Team Members Ingrid and Vivienne are mother and daughter, with Angel being their daughter-in-law and sister-in-law to be. Having worked at ECH for more than 17 years, Vivienne’s mother-in-law is also an ECH Home Support Team Member. After hearing about her passion for working at ECH, Ingrid, Vivienne and Angel visited a careers expo where they put their names down to work at ECH. One-by-one they all accepted offers and today are all now caring for ECH clients. “The most important part of my job is to make each client smile and laugh. If I can make a difference in their day, that’s all the reward I need,” says Ingrid.

DEB ASHE AND PHOEBE MALYCHA-COOMBS
Mother and daughter Deb and Phoebe started working together at ECH in the Customer Service Team in 2015, and continued to work together in the same roles for a few years. Now an ECH Member Services Officer, Deb says it is a pleasure to share the experience of working at ECH with her daughter Phoebe who is the Acting Manager of Client Services and Social Programs. “I’ve been lucky enough to watch Phoebe grow into the person she is today and I’m really proud of her,” says Deb. Phoebe says it’s lovely to work at the same organisation as her mum and feels like it has made their relationship stronger. 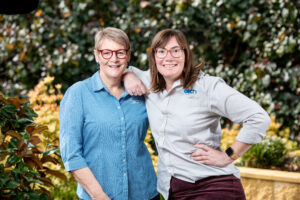 JENNY KROGDAHL AND AMY HERBERT
ECH Member Services Officer Jenny and her daughter, ECH Home Services Lead Amy, are new to working together, with Jenny starting at ECH earlier this year. After working at ECH for nine years, Amy encouraged her mum to apply when she was looking for more fulfilment at work. “It’s a testament to ECH that you can refer your own family to work here. There are many family connections within the organisation,” says Amy. Jenny says she has found the fulfilment she was looking for since starting at ECH as she loves helping people.