After initiating a community garden at her village in ECH Fairfield Lodge she has seen friendships blossom, knowledge grow and her fellow gardeners become more active. She has even got her neighbours cooking their healthy homegrown produce. 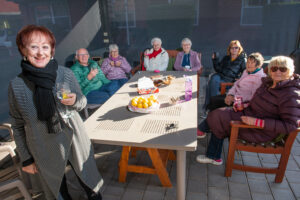 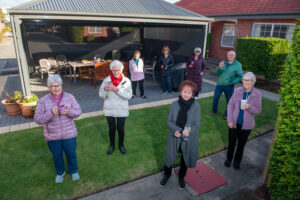 “I believe that every garden is important, but especially in a village because it brings people together,” says Von. “People who wouldn’t otherwise socialise will come out to chat to whoever is gardening, or join in with the gardening, and talk to others as they do.”

So, the garden was transformed, and Von organised a launch and invited all of the residents and some ECH staff, including ECH Chief Executive Dr David Panter.

“It was a lovely event,” said Von. “I just wanted everyone to see the garden and understand the benefit it gives the village.”

The garden is now used to grow produce that the residents will use, including parsley, chives, garlic, silverbeet, sweet potatoes and passionfruit and is also home to two in ground worm farms that recycle organic waste.

“It’s a community garden,” she says. “Anyone can work on it, and anyone can plant whatever they like.”

Fellow resident Norm loves the garden and the community it has created. “It’s like a little oasis in the middle of the village,” says Norm. “It is a real focal point.”

“However, it’s more than just a garden, it has brought the village residents together. We all raise funds for the garden either through donations or collecting refundable cans and bottles.”

“The village residents raise money for, work in and take from the garden. It’s the village all working together,” he says.

The money is kept in a kitty, which is then used to buy plants, compost, fertiliser and mulch – whatever is needed.

Norm says the garden has also inspired residents to start growing their own produce in pots on their verandas, as well as in the community garden.

For Von, you can never have too many gardens, so as well as the garden at ECH Fairfield Lodge she has also initiated a community garden at the nearby Organik Café on Broadway.

There are events around the garden, such as how to make a wicking bed, and now ECH is organising community events at the Organik Café with a green focus.

“I just love it,” laughs Von. “I just can’t keep my fingers out of the dirt!”

Would you like your ECH village to be featured in a future edition of Keep Connected magazine? Contact us at keepconnected@ech.asn.au