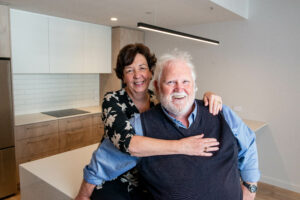 It has been a busy and very exciting few months for the residents of Encore Apartments, as they settle in to call their new village home. We spoke with some of our residents to hear about their experiences and how they are enjoying village life so far.

Liz and Foss had been thinking of downsizing for a few years but weren’t sure about the idea of moving into a retirement village. When they came across Encore Apartments after driving past the village construction, the couple agreed it was the perfect fit for them.

“We knew Encore Apartments was the right place for us as we can continue living independently in a retirement village environment with the opportunity to meet new people every day,” says Foss.

As the village has so much to offer, the couple are keeping very busy now, and Liz hopes to get involved in the SA Montessori Early Learning Centre when it opens in early 2022. “I would love to volunteer at the SA Montessori Early Learning Centre. I was a kindergarten teacher when I was younger and enjoy spending time with children, so to be involved will be wonderful,” says Liz.

Liz and Foss are taking the time to enjoy the community feel of Encore Apartments and look forward to the warm weather so they can ride their bikes and go for walks in their new area. 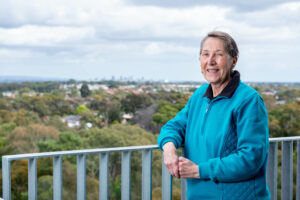 After experiencing some health issues and living with friends while she recovered, Joan saw her move into Encore Apartments as an exciting change in her life.

When she decided to move, Joan started looking for the right place where she wouldn’t need to worry about maintenance or managing a garden, yet provided the peace of mind of having other people around if she needed some extra support.

“Living at Encore Apartments is great because I have more spare time, I am able to meet new people and I have access to ECH services if I need them,” says Joan.

Joan enjoys being active and spending time outdoors while also getting to know her new neighbours.

“I’m so close to the shops at Tea Tree Plaza so I enjoy going for a walk and bumping into people who also live at Encore Apartments.”

“I like to look at my experience as a new lease on life, moving forward and not looking back,” says Joan. 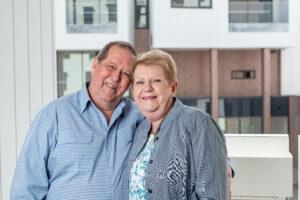 Robert and Jackie said farewell to the ocean air for their brand-new apartment in Modbury to benefit Robert’s health and wellbeing.

The couple previously moved from Golden Grove into a Goolwa Beach Retirement Village in 2018, but when Robert was diagnosed with an aggressive cancer in early January, the couple decided it was best to move closer to his specialist.

“We spent a week in Adelaide for some appointments and while here we went to visit the Encore Apartments display suite,” says Jackie.

“We thought ‘do we move back to Adelaide or stay at Goolwa Beach?,’ but we thought Adelaide was the best place for Robert’s health, and we wanted to be closer to our family,” says Jackie.

Apart from living closer to their three children and four grandchildren, Jackie said the best part of the move was the location.

“Encore Apartments is situated in such a great area, close to a great range of shops, as well as the hospital and Robert’s specialist which is perfect for us,” says Jackie.

New residents Bob and Kaye were the first people to call Encore Apartments home when they moved in early October. 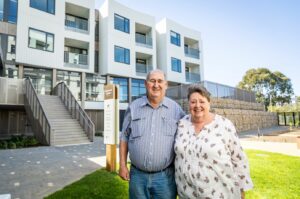 Moving was a significant step for the couple having lived in Port Augusta for the past 25 years.

Kaye worked as a teacher and Bob worked for Des’ Transport and while they had not originally planned to retire this year, Bob says the timing just felt right.

“When we first saw Encore Apartments, Floor 1 was already complete, and we were very curious about it,” says Bob.

When they got home, Kaye Googled the village and contacted ECH straight away.

Two days later the couple were visiting the display suite and choosing their brand-new apartment.

“All of the ECH staff have been wonderful right from the start, providing support and helpful information to make the transition as easy as possible,” says Kaye. Bob and Kaye are enjoying living in a vertical village and are excited to be part of a community.

“I’ve always been community minded, so now that we live in this village environment, I would like to encourage my neighbours to get involved in activities such as making sandwiches and baking cakes for the CFS or the Salvos to distribute to people in need,” says Bob.